Of course, there were always coconut (plain) and chocolate macaroons for Passover when I was growing up and I always loved chocolate better until I discovered home-made coconut macaroons dipped in chocolate that were so much better.

Taking a page out of a recipe from the Barefoot Contessa, I added some chocolate to a half batch of regular macaroons I had made.  After they came out it just so happened that I had some Ghiradelli White Melting Chocolate and a bit of coconut oil which I melted and dipped them in.

I just barely got the picture taken before they all dissappeared.

A good friend of mine had hipped me to my winning ginger snap/molasses spice cookie recipe and for me, that meant the end of tweaking.  Even though I am a chronic recipe tinkerer, when something gets high marks, is asked for repeatedly, I leave it alone.  Until another good friend suggested that there was a cookie of equal, if not greater merit by the Canyon Ranch called Triple Ginger Cookies.  I made it and though I must say it was a very, very, very good cookie, I was missing some of the flavors from the other cookie that I loved, namely cinnamon, nutmeg and cloves.   So just for fun, I added them in to see whether or not it would make it better.  It did.  Know what else made it better? Full-fat cream cheese (the original recipe calls for low-fat cream cheese, which is gross).

Of course, playing with ingredients and fat means adjusting the baking time.  The original recipe calls for a 9 minute baking time, but I found using small balls (1 inch scoop as a go-by), I needed about 16 minutes to get these to the right texture.   Now that’s a subjective matter based on whether or not you like them pudding-soft or or teeth-breakingly crisp, or somewhere in between.
Ingredients
Instructions 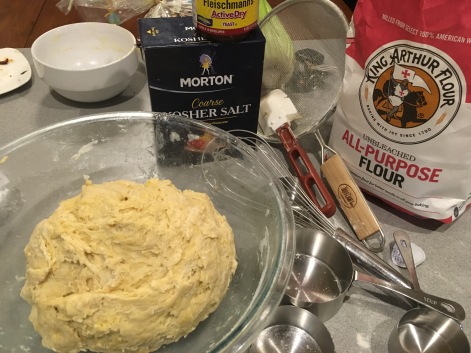 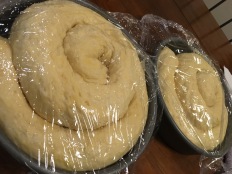 There are a lot of Challah recipes out there.  They range from sweet to savory and cover a wide range of origins.   Growing up, I found challah to be a somewhat dry and flavorless bread that was usually served with no butter or topping, and very often at the point when I was at my hungriest (it is a tradition to slice a challah at the end of the Saturday morning services) and I would have eaten anything.   I never thought too much about it, but as I got older, I was introduced to Challah French Toast, which was a revelation that made me realize I must have challah in the house at all times.  This led me to Cheryl Ann’s (of Brookline) challah, which some fans have noted is more like a Mardi Gras King Cake than a traditional challah, as it so sweet, fluffy and eggy.

Challahs from other institutions like Whole Foods are good but have a strange smell when toasted.  (This is kind of a turn-off, and I will refrain from my opinions of the smell)

This recipe below is modified from the King Arthur No-Knead Challah recipe, which I have modified slightly over the years.   I have also made it Vegan, using Earth Balance, Egg Replacer and Agave.  Still pretty good.

The recipe (and tradition) call for the challah to be braided.  While I very much enjoyed learning how to do this (the indispensable but short video here), I found that the key to a light and fluffy challah (or any yeasted, baked product) was to handle it as little as possible once it was in it’s near-final form.   Since the holiday challahs are round (to convey and celebrate the circular nature of life, etc.) I decided rolling out the dough into a log and baking it in a 9″ round was infinitely easier and resulted in a better final product.

Also, a bread thermometer is a good investment, but I have found that at 35 minutes at 350 degrees, this comes out perfect every time.

Directions
(I never use the bread mixer attachment on my stand mixer or the like alternative. I always do this by hand).

Let cool (until you can hold it to slice it), about 15 minutes.  Serve warm with butter, hummus, apples and honey or other toppings.      Great for toasting, and for making Challah French Toast a few days later.

For Alexander Hamilton’s birthday, I gleefully re-present the collection of flavors (The Federalist Flavors) I worked to create with my sister-in-law at Jane’s Ice Cream and my family (my brother  did the poster and ice cream containers)! We did it as a labor of love and then they were able to share it with the original cast of Hamilton at the Richard Rogers for an ice cream social.

Again, we did it just to thank the incredible cast and crew for creating the most incredible broadway show of our generation. When Hamilton: An American Musical posted the ice cream menu to their Instagram feed (https://www.instagram.com/p/BD6-8Sgo9Yc/), it got over 31k likes and 16k comments. For Hamilton that’s not unusual, but it was exciting to be a part of! We were huge fans and the fans loved it! The Hamilton flavors aren’t available to the world but the great Ice Cream of Jane’s Ice Cream is. Happy birthday to the 10 Dollar Founding Father!  #alexanderhamilton #janesicecream

If you are a reader of this blog you know that I never claim to completely invent my recipes, and that this blog is simply an expression of ideas that may make regular or standard issues easier or more appealing than they are from existing popular or standard recipes.   But very often, if not always, the recipes begin somewhere else.  This salad was created by my wife, and I don’t know if she was just feeling inspired but it is my single favorite salad of all of time and I never want another salad if it’s not this.  OK, I will eat other salads, but if you ask me it will be this all the time.

I found schnitzel to be ubiquitous when I visited Israel, and like their hummus, delicious everywhere I had it.  Their schnitzel is so much better than what ours has become, basically a chicken nugget- that I was inspired to try and recreate it.  Of course thanks to the Internet, that’s pretty easy since there are lots of great recipes out there.   The one I started with is from Janna Gurr.  As she notes, and I agree with, it is best served with hummus, pickles and something green, like a salad.

Even though it is fried in oil, a good schnitzel should be light — not heavy, so make sure your oil is the right temperature and get your pieces in and out quickly.

If you cook most of the meals in your house you are likely to either fall into a rut or grasp greatness by experimenting with new things.  I am always trying to simultaneously improve what I’m making and trying to capture some far-off, once-tasted flavor or texture that I experienced in the past. Sometimes I have an innovation so small (like using the toaster for Grilled Cheese) that I don’t feel it’s worthy of writing down. But when I get requests from my family, I know I should.  This my family’s favorite oatmeal for winter mornings recipe.  If you know me and have read this blog, then you’ll know it’s nothing complicated– just a matter of adding some extra stuff to an existing recipe (on the Quaker Oatmeal box. Is that what you call a round container made of cardboard?).

The recipe calls for making two cups of oatmeal as its largest size– but that’s hardly enough for one hungry person, let alone a family. I initially doubled it but didn’t want to choose between milk and water as the liquid- so I used both.  I also felt that the end product prepared as recommended was relatively tasteless (see my previous experience with that here). Since oatmeal contains a significant benefit of fiber, I thought, “how can I make it more appealing to kids?” Of course the answer is sugar, but in what form, how much and what else?  Following the lead of every other instant oatmeal on the shelf*, I added cinnamon, brown sugar and nutmeg and rather than add lots more sugar, I opted for maple syrup extract, which is has more flavor and less sugar than its fully syrupy parent.

Of course, vanilla and more salt than the recipe calls for, and I have experimented with adding a tablespoon of butter for ‘soul.’     Lastly, I understand that not everyone likes the same inclusions so I prepare those separately.  For the serving pictured above it was toasted pecans and raisins.   It was a hit.

*Note: whether you utilize the fat/sugar grams or glycemic index to measure your food’s health you can tell that a majority of the available instant oatmeals are loaded and should be avoided at most costs.  Check out the Internet if you want detailed analysis.